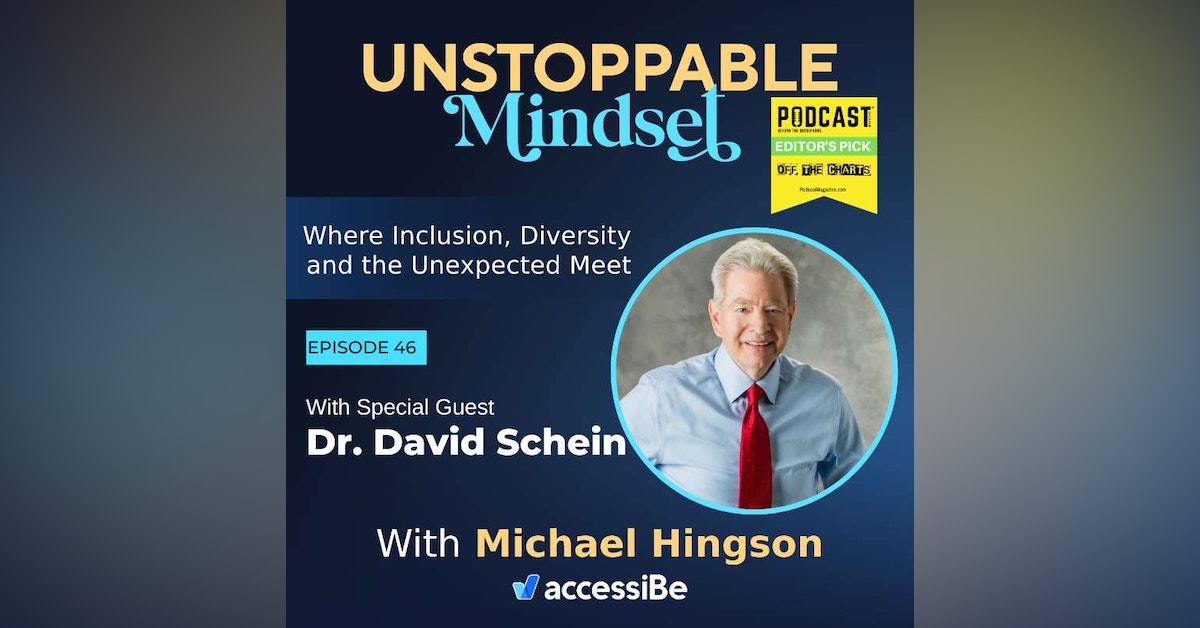 By now, regular listeners to this podcast have observed that I begin episodes with the word “Unstoppable”. I stole the idea from the old-time radio show Dragnet which began every show with the words “The Big” followed by other title words. Hey, it worked for Dragnet so why invent something new? You will hear near the end of this episode why I used “Unstoppable Guy” as the title.   Anyway, meet Dr. David Schein, JD, Ph.D. who currently is a Professor, Endowed Chair of Management and Marketing, and Director of Graduate Programs at the Cameron School of Business at the University of St. Thomas. Throughout his lifetime, Dr. Schein has worked first as a real estate salesperson, and then later as a lawyer for many years. Now he is teaching others his skills and giving them his knowledge and wisdom through his teaching efforts.   As you will discover, David made choices that moved his career along. His story is quite fascinating, and he is by any definition unstoppable. I hope you enjoy listening to David Schein’s conversation and that he will inspire you with his thoughts. Please let me know your thoughts and, as always, please give us a 5-star rating after you hear what David has to say.     About the Guest:

Dr. David D. Schein, MBA, JD, Ph.D. is a Professor, Endowed Chair of Management and Marketing, and Director of Graduate Programs at the Cameron School of Business at the University of St. Thomas. Dr. Schein is frequently interviewed on employment and business law matters. He speaks for business and industry groups throughout the United States on various current topics. His new book is: Bad Deal for America. He is also the author of The Decline of America: 100 Years of Leadership Failures (2018). He has been quoted in numerous national and local publications, including Forbes and US News and World Reports. In addition to hosting “Saving America” and “Business Law 101” webcasts, he has been interviewed on numerous webcasts and podcasts in the United States and England. He also is President and General Counsel of Claremont Management Group, a national human resource consulting and training firm, which is celebrated its 30th anniversary in 2019.   Author Website/Blog: https://claremontmanagementgroup.com/ Author Profile Page on Amazon: https://www.amazon.com/gp/product/B09RNG3YY3/ref=dbs_a_def_rwt_hsch_vapi_tkin_p1_i1 Goodreads Profile: https://www.goodreads.com/author/show/17164693.David_D_Schein Facebook Profile: https://www.facebook.com/authordavidschein/ Twitter Account: https://twitter.com/dschein1 LinkedIn Account: David Schein | LinkedIn       About the Host: Michael Hingson is a New York Times best-selling author, international lecturer, and Chief Vision Officer for accessiBe. Michael, blind since birth, survived the 9/11 attacks with the help of his guide dog Roselle. This story is the subject of his best-selling book, Thunder Dog.   Michael gives over 100 presentations around the world each year speaking to influential groups such as Exxon Mobile, AT&T, Federal Express, Scripps College, Rutgers University, Children’s Hospital, and the American Red Cross just to name a few. He is an Ambassador for the National Braille Literacy Campaign for the National Federation of the Blind and also serves as Ambassador for the American Humane Association’s 2012 Hero Dog Awards.   https://michaelhingson.com https://www.facebook.com/michael.hingson.author.speaker/ https://twitter.com/mhingson https://www.youtube.com/user/mhingson https://www.linkedin.com/in/michaelhingson/   accessiBe Links https://accessibe.com/ https://www.youtube.com/c/accessiBe https://www.linkedin.com/company/accessibe/mycompany/ https://www.facebook.com/accessibe/       Thanks for listening!

Thanks so much for listening to our podcast! If you enjoyed this episode and think that others could benefit from listening, please share it using the social media buttons on this page. Do you have some feedback or questions about this episode? Leave a comment in the section below!   Subscribe to the podcast

Ratings and reviews from our listeners are extremely valuable to us and greatly appreciated. They help our podcast rank higher on Apple Podcasts, which exposes our show to more awesome listeners like you. If you have a minute, please leave an honest review on Apple Podcasts.     Transcription Notes

Email has been submitted.